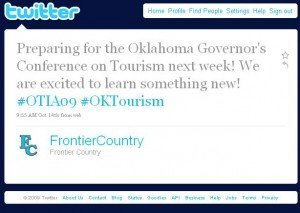 For the past few weeks, I’ve been globe-trotting….well, more accurately, Continental-U.S.-hopping.

I’ve been keeping an eye on the action at state tourism conferences for Virginia, Ohio, Missouri and Texas, ESTO (Educational Seminar for Tourism) in Lake Tahoe, the Twitter-related 140 conference in Los Angeles, and BlogWorld and New Media Expo in Las Vegas.  I’ve also physically attended the Association for Women in Communications (AWC) conference in Seattle and heard info from panels that I didn’t personally attend, and I’m already waving hello to people at the Oklahoma Conference on Tourism in Tulsa, although it doesn’t really start until tomorrow.

While I’d love to have unlimited funds, piles of frequent flyer miles and telepathic powers, I have to confess that I’m “attending” these conference by watching their Twitter hashtags, and you can, too.

Hashtags are simply a way of organizing all tweets that relate to one topic or event.  There is a central Web site for them, hashtags.org, but it’s not always terribly accurate or up-to-date. The assignment of a hashtag is often a rather informal, crowd-sourced event, announced in attendee tweets and thereafter appended by each interested person (if they remember) to every tweet that relates to the topic or event.

For example, as long as I remember to do it, every tweet that I send from or about the Oklahoma Governor’s tourism conference will have #OTIA09 in the body of the tweet – OTIA is the Oklahoma Travel Industry Association.

Look at the photo above to see what it looks like in one sample tweet, from central Oklahoma’s Frontier Country region.

At big conferences, individual panels or sessions will sometimes assign themselves a hashtag.  For example, tweets from the panels in the Travel Blogging Track at the 2009 BlogWorld Expo (hashtag #BWE09) had the hashtag #TTBWE09 (TT for “Travel Track.”)

If you attend an event and plan to tweet about it or from it, and there doesn’t seem to be a hashtag already in use, don’t be shy. Create one yourself and announce it in a tweet.

Do pick something that is as short as possible, since every character in your hashtag counts against the 140 character maximum in a tweet. If your event is an annual one by the same organization, simply change the year at the end.

To follow all the hashtagged tweets in action, I use three tools:

Word of warning – Twitter search only works for a week or two back, so your stream of hashtagged tweets will “evaporate” after awhile. If you want to capture the action for posterity, take some screenshots.

(Update – a new deal between Microsoft’s Bing search engine, Twitter and Facebook was announced 21 October at the Web 2.0 Summit, so now you may want to also go to Bing at https://www.bing.com/ and see the search results for your hashtag of interest. I’m hoping they keep results around longer than Twitter so that I can “dig in the search engine closet” further back than a few weeks.)