Steps to revitalizing a downtown: thoughts from Huntsville, Texas

As part of US National Travel and Tourism Week (May 8 – 16, 2010) towns and cities across the United States are planning a variety of festivities to recognize and celebrate the importance of visitors and travel.

In Texas alone in 2008, travel spending directly supported over 500,000 jobs and people traveling in the state spent an estimated $60.6 billion.

I’m checking out the scene in Huntsville, Texas, where the newly-designated downtown Huntsville Cultural District is helping the town’s tourism and downtown development efforts. 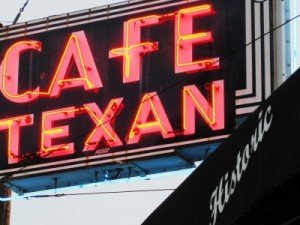 Helping to kick off the festivities is a new folk art exhibit….Art Matters: Works by Self-Taught Artists….at the Wynne Home Arts Center.

The town decided to use Travel and Tourism Week to draw attention to all of the interesting cultural and arts activities in the area, and the Wynne House folk art event was the jump-start.

I saw lots of wonderfully colorful and imaginative pieces and spoke with several artists at the opening (will post more here later and some pics are going up on Flickr, TwitPic and Facebook as well) but here are three tourism-related thoughts from a few conversations I’ve had today:

(Disclosure: my Huntsville trip has been paid for in part by the Texas Commission on the Arts)