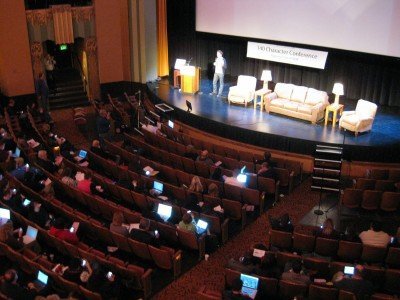 After our great experience holding the 140 Characters Conference Small Town in the restored Fox Theatre in Hutchinson, Kansas, I began thinking about how small towns with the right timing, venue, networks and entrepreneurial spirit can host more tech- and social media-related events.

The result of my musings was an article I wrote for the January 2011 issue of PCMA Convene (the magazine for the Professional Convention Management Association) and a guest post on the PCMA blog: “Small-Town, Not Small-Time.”

“Some tips on using a small town venue for digital gatherings:

1) Don’t make assumptions about which places can and can’t host. The 140 Characters conferences, for example, “are usually and most effectively held in theaters; in fact, the very first one in New York was based on the idea of [a Twitter-like] one hundred and forty characters gathering together in an off-Broadway theater,” said SmallTown’s lead organizer Becky McCray, who has also spoken at 140 Conferences in London and Detroit. “All we had to do was bring WiFi (wireless Internet) into Hutchinson’s Fox Theatre, and it was perfect.”

For the rest of the tips, see the full article about how an Art Deco theater hosted a bunch of modern geeks, in “Small-Town, Not Small-Time.”

So many small towns and rural areas fight the image of being backward, and they find it tough to draw and hold onto talent.  The web and social media changes that, and consequently can have a big impact on economic development.