Of all the social media tool and channel options that bombard us daily, the most indispensable, cannot-live-without ones for me are my blogs….and Twitter.

An early tweet from BL Ochman that the “suits” don’t get social media. A lot of them still don’t.

My good friend (since 1978!) and tech mentor Dwight Silverman, editor at the Houston Chronicle and author of TechBlog, encouraged me to start blogging, get on Twitter and get a smartphone, all of which have been game-changers for me. Thank you for all of it, Dwight.

The blogs are the linchpin of most of my writing and publishing efforts; they would be the last URL standing for me in case of a social media neutron bomb, because I own them and control them.

Twitter is not something that I can own or control, but my passion for it is almost as strong as my love of hitting that Publish button on a blog post.

There is simply no other social media channel that works as well for business development, research, worldwide networking, professional development and good old friendships. Layer over all that the ability to easily connect with my entire network while on the move, via a mobile device….well, Facebook and the others can’t really touch it.

Today marks my 5th year on Twitter (I started the @SheilaS account on September 25, 2007) and while most tweets “age out” and disappear after a week or two, there is one way that you can still find them – hit that gold star and Favorite the tweet. 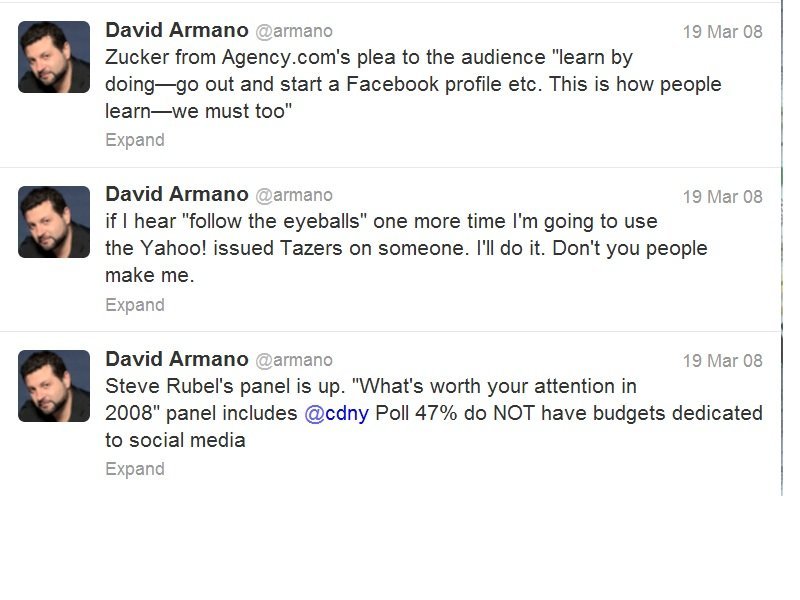 David Armano tweets updates and insights from 2008 SXSWi (South by Southwest Interactive.) Love the Yahoo! reference, the urging to start a Facebook profile and the lack of budgets for the social media “fad.”

I’m very sporadic about Favoriting, but fortunately I did it a lot in my early Twitter days. This morning I scrolled all the way back through my Favorites, reading them with plenty of chuckles, amazement at some of the more prescient tweets and with an overwhelming feeling of affection toward all of the now-familiar people and friends I’ve followed (and eventually met in person, including my business partner of three years, Becky McCray.)

Originally I’d planned for this post to feature select Favorited tweets from across all five years, but I couldn’t get out of the stack past April 2008. 🙂  I love all of these little windows into people’s thoughts or I wouldn’t have Favorited them in the first place. 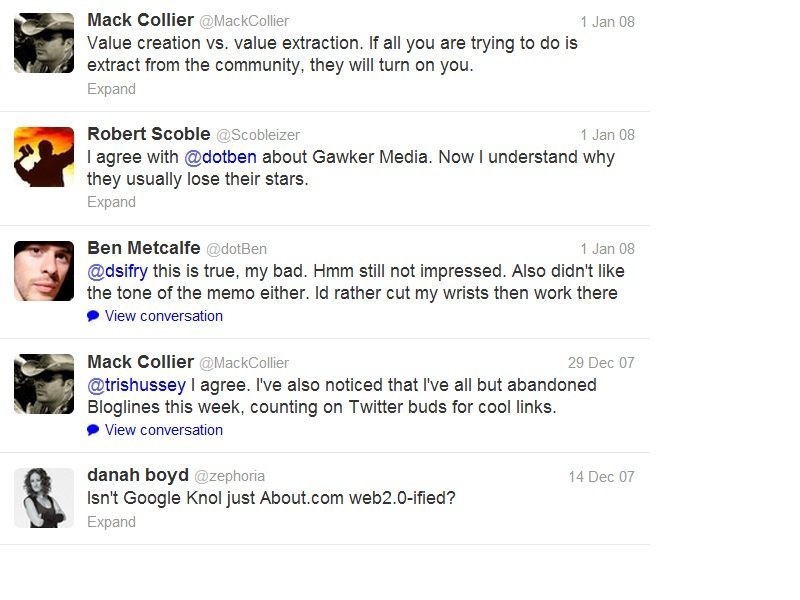 These are the earliest of my Favorited tweets that I could find. Particularly like the Knol observation from danah boyd (years later we’re looking at a moribund Google+ and Knol is long dead) and the still-accurate comments from Mack Collier about community and Twitter as an RSS replacement.

These screenshots of tweets show the diversity of discussion topics, viewpoints, useful links and occasional silliness; it’s no different than being in an online chat room or IM group, but one that is full of hand-picked interesting people (because you pick who to follow.) As the saying goes, if Twitter is boring for you, it’s because you’re following boring people. 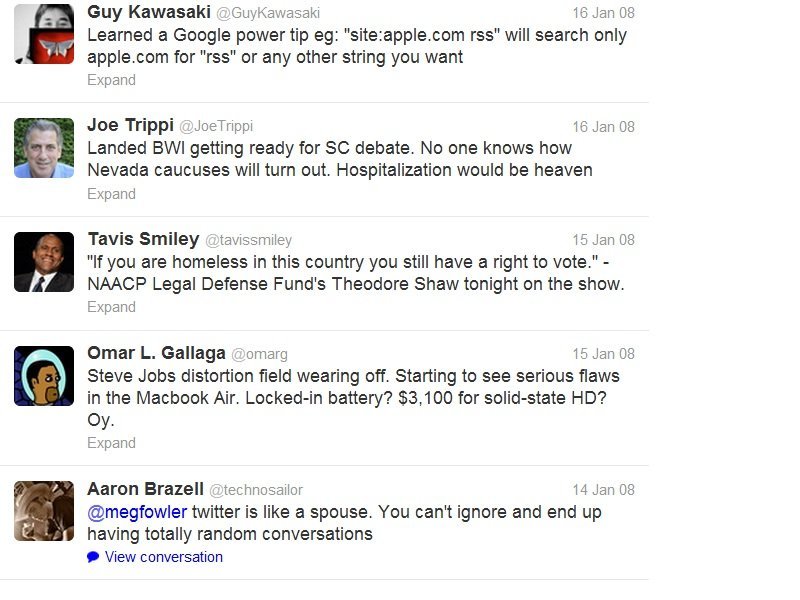 I was struck by how many of these tweeps I still follow – some of the very first ones, found mostly by following people who I recognized from their writer bylines, or from a conference or on the recommendation of people I trust: “Oh, you HAVE to follow so-and-so; they are so smart/funny/interesting/helpful.” 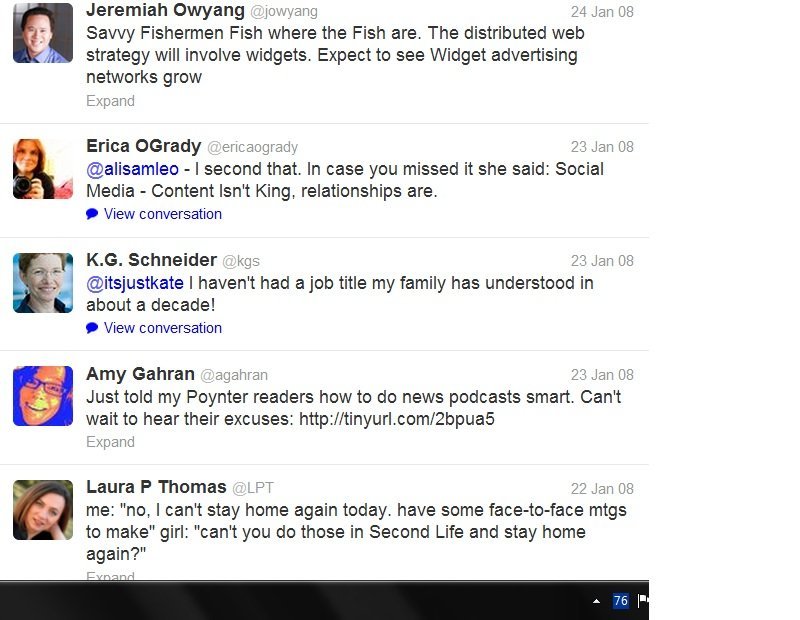 Podcasts, what is really King, widgets, WTF is your job and @LPT having Dell meetings in Second Life. Yes, I miss Second Life. Don’t knock it till you try it.

There IS the problem of disengaging with a group of such intriguing people….

And this is so true….

It’s not called the World Wide Web for nothing; many’s the time I’ve known I’m up too late as the Aussies on Twitter begin to say Good Morning.

Then there’s the random bit of unexpected humor in a tweet stream that totally brightens my day…. 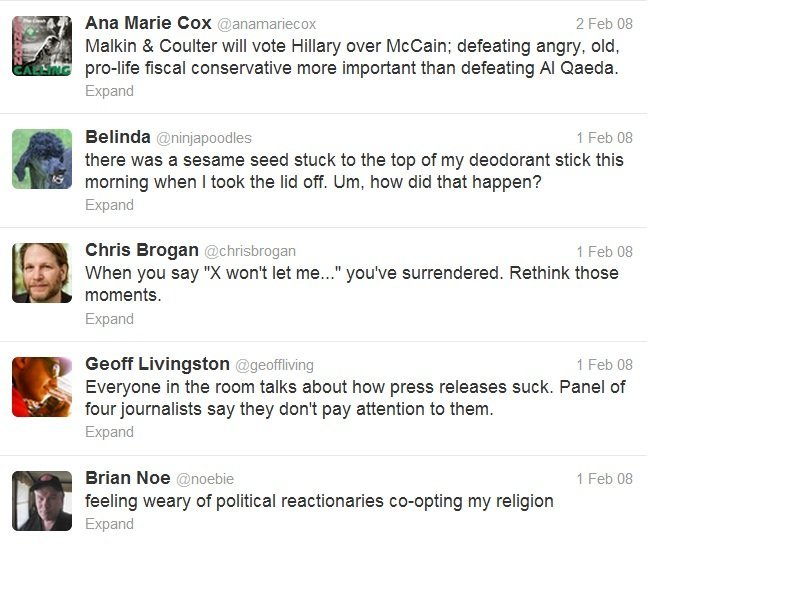 Who knew that there would be actual, paying jobs doing this stuff? Well, there are. It’s simple relationship-building and communications by other means. Thanks to the web, a good communicator can be an asset to any company, anywhere in the world, and that person doesn’t have to even be located with the company. It’s what they call working “anywhere, anywhen” in Small Town Rules.

This grouping below ends with a rather plaintive tweet about how Twitter is as “freeing as blogging used to be.” I think back in the early days of social media, some felt that new platforms would by default replace others, but over time we’ve seen that there’s room for a lot of different places to gather on the web. There are plenty of people whose only social media interaction is on mobile photo-sharing sites like Instagram or Foodspotting – does that mean that “Facebook is DEAD?!”  No, of course not. 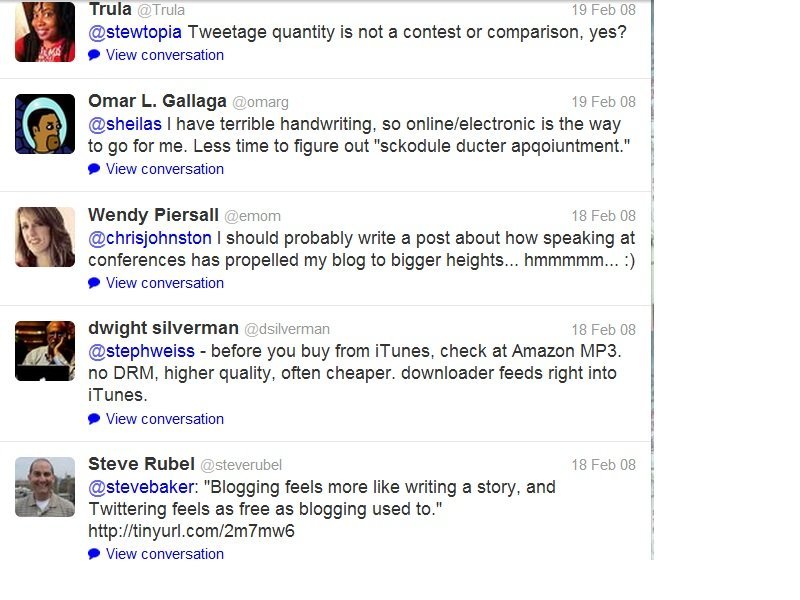 Music tech advice pre-Spotify, discovery of the power of online work to impact offline opportunities like speaking gigs and excitement over Twitter when it was new and shiny.

So, what’s the ROI for me and my livelihood of five years of tweets?

Let’s see….a successful social media training business, quicker access to the news as it happens and faster, better news analysis, travel to China on a blogger trip that laid important groundwork for me professionally, plus a diverse network all over the planet that has helped me with everything from where the transportation engineers hang out on social media (for a speaking gig that I landed through Twitter) to business connections and friendships out the wazoo.

Also, laughs when I needed them the most, from fabulous people like this who share my love of bourbon and distaste for BS….

(Hat tip for my post title to the real internet Wayback Machine.)