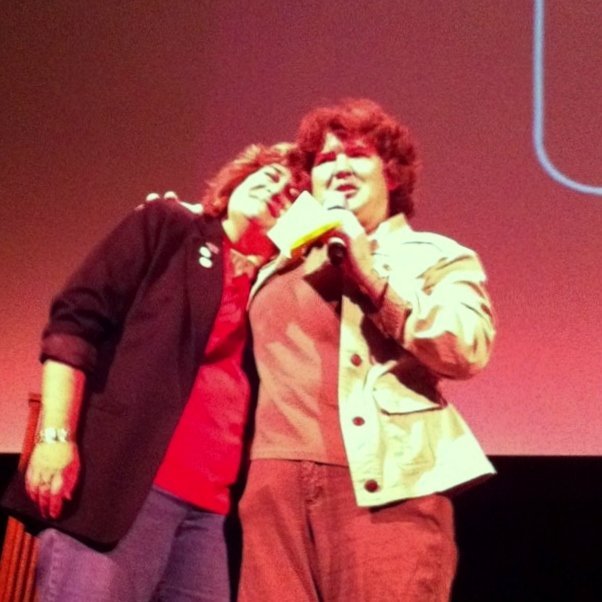 Sheila and Becky, business partners and friends, on stage at 140 Conference / State of NOW SmallTown in Hutchinson (courtesy Andrea Cook on Instagram)

It was one of those split-the-baby moments when I had to decide which one to attend.

The obvious choice might seem to be SoMeT;  I’ve spoken there twice, am a huge fan of conference founder Dave Serino, the attendees are the exact market for our Tourism Currents training business and this year it will be held in the state where I live.

Of course, anyone who knows Texas knows that El Paso is in the far western end of a BIG state – it’s a 9 hour drive to get there from my home in central Texas, about the same as what it takes to drive north to Hutchinson.

The other conference …. #SmallTown2012 is the event’s Twitter hashtag if you want to follow the action …. is organized and run by my Tourism Currents co-founder Becky McCray. Its focus is technology and social media in small towns and rural areas, which is very interesting, but y’all know I’m a city kid who doesn’t know a piece of farm equipment from a hole in my head.

Why did I choose to go to SmallTown, then?  Because friendship and desire to support Becky’s efforts trumps business, and going to Hutchinson means more opportunity to hear jaw-dropping insights I’ve never heard before.

SoMeT will have terrific speakers. Everyone will talk digital and social marketing and they’ll talk about it at a high level; this is probably the most advanced conference on social media in tourism in the world. SoMeT tourism geeks are that smart – they are pulling much of the rest of the destination marketing industry along behind them.

Now, I’m no genius, but I’m pretty up to speed on social media in tourism myself or I wouldn’t be teaching it to others. Since simply keeping up is not good enough, I try to stay ahead of the curve by also hanging out in places where I hear unusual things, see out-of-the-ordinary speakers and make connections that I might otherwise miss if I spent too much time in the same bubbles with fellow nerds.

The most striking feature of the SmallTown conference is the large number of ordinary folks, from stereotypical “non-techie” places, speaking imaginatively about how they use technology and social communications in their everyday lives.

When I sit in the host venue Fox Theatre in lively downtown Hutchinson and hear their stories (only 10-15 minutes each, with zero PowerPoint – yay!) I am seeing the future because I’m getting a peek into how the first wave of regular people, the “early adopters,” use technology-based tools in towns from Upper Black Eddy, Pennsylvania to Lake Arrowhead, California to Saskatoon, Saskatchewan.

Since you can follow an event from afar via Twitter hashtags, I’ll still be able to see what’s being shared at SoMeT in El Paso when I have a spare minute, and I certainly hope that next year I won’t have to make a painful choice between two such enjoyable and valuable events.