Travel Post Friday: Jasper, Alberta when you are not a snow bunny 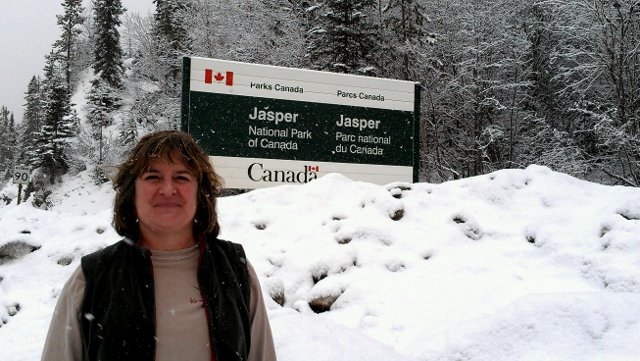 At one of the entrances to Jasper National Park, Alberta, Canada

When I headed north to visit Edmonton and Jasper in Alberta, Canada in the middle of February, several people asked me what in the world I was going to do in Jasper when it’s known for snow sports and I don’t DO any snow sports (a combination of living in snow-deprived Texas and having a bum knee.)

“That’s exactly why I’m going.” I said. “The best stories always happen when everyone thinks you’re crazy to go somewhere.”

Part of the VIA Rail map of the Canadian train route from Toronto to Vancouver, including across Alberta (photo by Sheila Scarborough)

Yes, OK, it was cold, but not that bad; down in the teens a few times and occasionally up into the 40’s and nearly 50’s (Fahrenheit.) I rummaged my husband’s snow pants from the back of the closet, brought my old Land’s End stadium coat and I was fine.

Jasper is in the middle of a Canadian national park – the town was there before the park was established, so they were sort of grandfathered in. That’s what makes it appealing; it feels like a regular place with normal people, not some sort of weird Stepford faux-alpine village that was purpose-built for tourists. The railroad still employs about a third of the townsfolk, and locals call the big nearby ski resort Marmot Basin “the ski hill.”

You can drive, fly or take Canada’s VIA Rail “Canadian” to get there …. and you know I’m hard-pressed to turn down any chance to take a train. You’ll see magnificent scenery on the ride, especially in the Voiture Panoramique/Skyline Dome cars…. 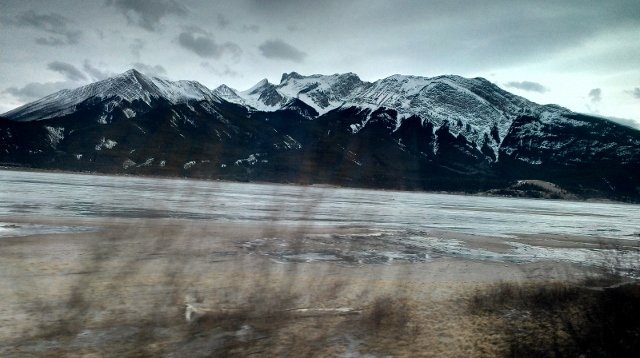 The Jasper station, built in 1925 and plopped in the middle of town, is one of many heritage railway stations in Canada. 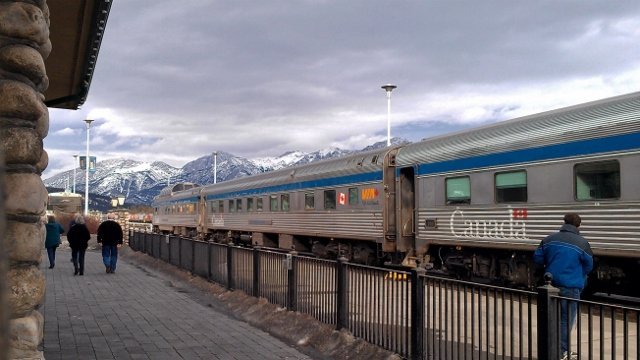 Arriving on the VIA Rail Canadian at the Jasper, Alberta train station (photo by Sheila Scarborough)

Don’t miss the soaring, colorful Two Brothers totem pole next to the station, and the Visitor Center is right across the street. 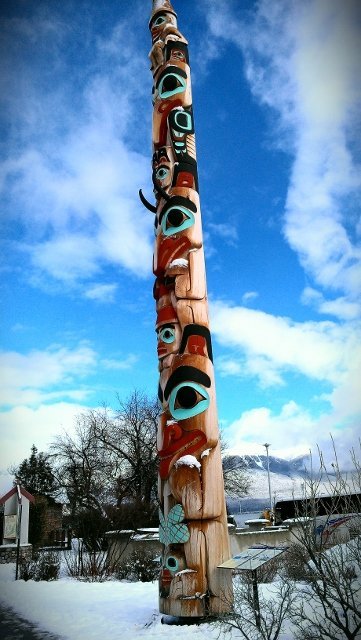 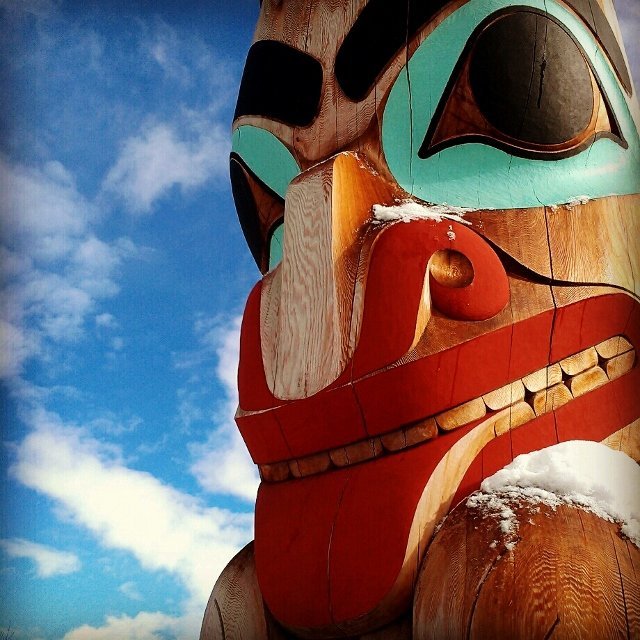 Detail on the Two Brothers totem pole next to the train station in Jasper, Alberta (photo by Sheila Scarborough)

You’ll hear about “ice walks” in Jasper – it’s a chance to walk (with special boots and crampon-like cleats) along what is normally the bottom of the Maligne River as it roars through the Maligne Canyon. In winter the water is either frozen over or disappears into underground karst fissures where springs bubble, leaving behind huge ice formations.

I went on one of the night ice walks, equipped with bright headlamps and a LOT of paranoia about falling – thanks to an old torn ACL in my left knee and a new problem with ironically-named frozen shoulder on my right side – but as long as I stepped carefully in a few slippery spots, I was fine. 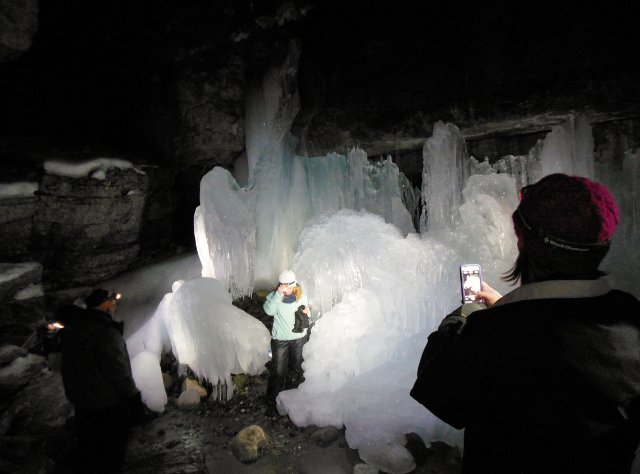 Although you can’t dogsled within the park, there are opportunities to do so about an hour’s drive away. 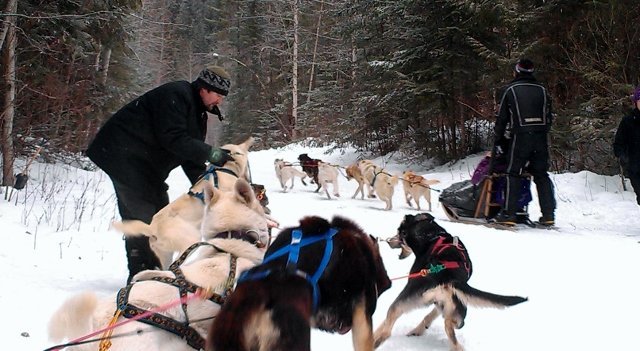 Sled dogs are ready to go near Jasper, Alberta (photo by Sheila Scarborough)

The crew at Cold Fire Creek Dogsledding leads tours through the Robson Valley; guests normally drive the teams themselves after a little training, but I was sled-bound by concerns that my shoulder wasn’t up to properly controlling a bunch of rarin’-to-go dogs and their equipment.

My musher Kyla was a travel fanatic and schooled me about Burma/Myanmar while she drove the team. You can imagine how odd but magical it was to hear about Southeast Asia as we drove through Christmas-card trees, around big piles of snow and carefully across a white meadow marked with avalanche warnings. Here is my sled’s-eye view: 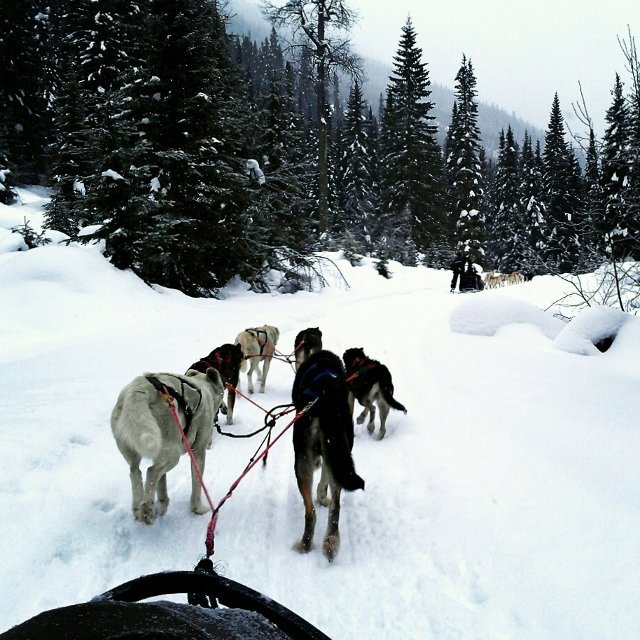 View from the dogsled near Jasper Alberta (photo by Sheila Scarborough)

That makes complete sense when you see places like Medicine Lake near Jasper – we were out on a wildlife tour the next day, but pulled over to take in the scenery: 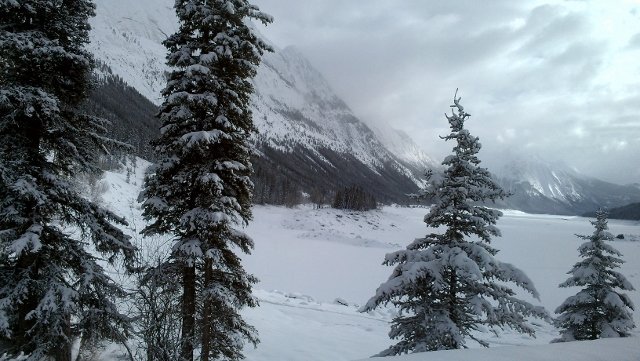 Medicine Lake in February as the sun peeks out, Jasper, Alberta (photo by Sheila Scarborough)

When nighttime falls, the stars are absurdly bright in the park; it’s the world’s largest Dark Sky Preserve. Before they come out, though, the sun has to tiptoe behind the mountains, and by February it’s not doing that too early, either, so the days are nice and long. 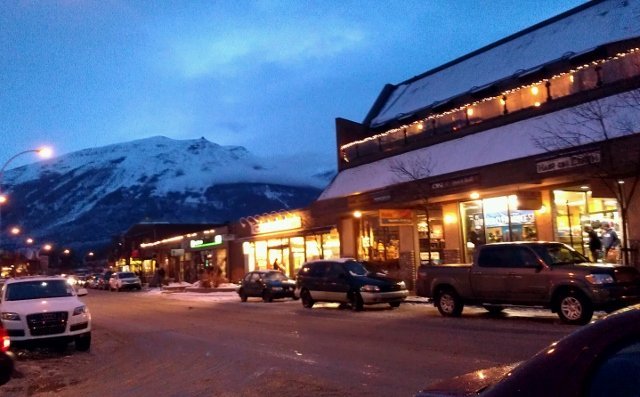 When I return to Jasper (and I will return!) I’m going to look into snowshoeing.

There are trails just outside of town and I could hire gear and a guide, unless some other critical body part of mine decides to go kaput. I saw a small group putting on snowshoes and getting ready to head into the woods as we drove up to Medicine Lake – I was wildly jealous of them and their ability to head “off-road” to go exploring in the snow.

Can’t you see it? I’ll replace my Darth Vader black stadium coat with some sort of colorful sporty jacket, and I’ll morph into the most amazing 50-something snow bunny. You just wait….

(Disclosure: I was a guest of Tourism Jasper, Chateau Jasper, Maligne Adventures, Cold Fire Creek Dogsledding and Sun Dog Tours during this trip, but opinions are my own. Travel Alberta and Tourism Jasper had great answers for my initial pre-trip question, “What the hell am I going to do up there in February?!)