What is SXSW Interactive? 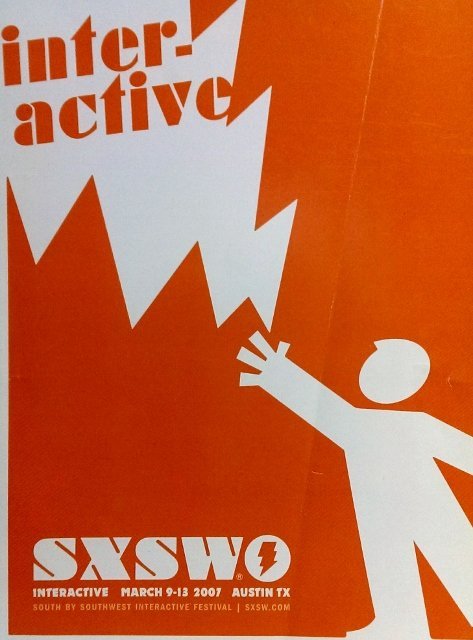 The cover of my SXSWi 2007 print conference guide; the first time I attended the event (photo by Sheila Scarborough)

It is that time of year here in central Texas.

Time for “South by.”

South by Southwest in Austin, Texas.

“The thing that ate the month of March.”

There are three parts to the SXSW festival – Interactive, Film, and Music. Many only know about the well-publicized Music portion (which is indeed a huge deal) but in fact the Interactive/technology part of the event draws the most attendees – 30,000+ in 2014, with the same number or more expected this year in 2015.

Some think of it as a social media conference or even a marketing conference, but for me it is much more about intersections….the Venn diagrams of our lives. It’s a giant discussion about the web of technology, digital, mobile, social communications, and business (especially entrepreneurship,) plus media, government, and how technology matters in “life stuff,” like sports, food, fashion, and parenting.

The event has quite a rep as one big boozy party – “Spring Break for Nerds” – but those of us who did college already usually leave that part to the amateurs.

Local Austin American-Statesman technology reporter Omar Gallaga has a SXSWi definition that I really like in his article “What’s changing and not changing at this year’s SXSW Interactive.” He calls Interactive “the annual festival celebrating innovation, ideas and dilemmas of the tech age….”

If that sounds like a sprawling mess, well, that’s why I like it. It is about life, and life is messy.

But here’s why I never miss it….it is the one event that shows you right now what people will be doing three to five years in the future.

In 2007, I went to my first #SXSWi. I’d just moved to the Austin area, and I’d started a family travel blog when I retired from the Navy in early 2006. In between incomprehensible geek terms in the event’s online marketing material, I saw the words “digital creative” and “blogger.”

“Hey, that’s me!” I thought. “I don’t know about any of this other technology-related chatter, but I’ve been blogging for at least a year, so I’m not totally clueless.”

I’ll never forget Kathy Sierra‘s 2007 opening keynote – she made a joke about Python and Ruby (computer programming languages) that had the whole room laughing, and I did not understand a word of it. Uh, oh. Had I spent about $300 to be completely lost for five days? (Note: Interactive passes are now more like $800-$1300, so I got in when it was a bargain.)

As it turned out, my money was well spent if I wanted to see the future and think about human connections and communications every spring, with hundreds of the smartest people on Earth all thrown together in one place.

Eventually I ended up on the SXSWi Advisory Board (now called the Programming Committee,) which means that every summer, my Board colleagues and I read through hundreds of panel proposals for the next spring’s conference. I’m a tough sell; recommending the ones that are really unique and interesting, and giving a picky thumbs down recommendation to many, many others that in my view are just social media marketing presentations overlaid with a veneer of techie verbiage to make them sound good.

Every year, there are snarky tweets, blog posts, and media articles saying that SXSWi is done, over, run its course, jumped the shark. People tweet that it’s too expensive, it’s impossible to get a place to stay (the Austin downtown hotel situation IS appalling but they’re furiously building more lodging,) the “panels all suck,” blah, blah, blah.

Methinks thou doth protest too much. You KNOW that this is where the action is.

There is no other event that will mix you in with so many smart, creative, interesting people from around the world doing extraordinary things. If you show up to such a gargantuan gathering without a plan, you will doubtless miss a huge part of the value unless you’re very good at on-the-fly networking. If you show up only to party, then rock on, but the rest of us have higher aspirations.

SXSWi is my personal and professional Super Bowl, and I’m honored to walk in every year, pick up my badge, and dive into five days of mind-blowing presentations and discussions.

I haven’t tried daily blogging from the conference for quite awhile, but I may give it a shot again this year….a short summary post of what’s top of mind as each day concludes. Let’s see how it turns out!

(Update – well, that didn’t happen, although I did a lot of live tweeting, but I’m working on follow-up posts for both Tourism Currents and the Perceptive Travel Blog, and I’ll post links to them here.)